Ann by Holland Taylor is an intimate ho-holds-barred portrait of Ann Richards, the legendary late Democratic Governor of Texas.  This inspiring and hilarious play brings us face to face with a complex, colorful and captivating character bigger than the state of Texas.  Featuring Priscilla Young-Anker as Ann Richards

The Convent by Jessica Dickey is about a group of women who go on a retreat to live like nuns in the Middle Ages and are baptized with eighties pop, female mysticism, hallucinogens, and sex.  This is a dark comedy about desire, devotion, and the mystery of the intrinsic divinity. 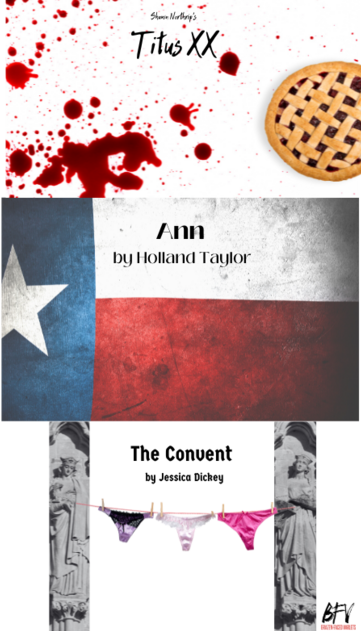 Get ready to rock out with the Varlets' first ever musical!
Adapted from William Shakespeare's bloodiest play, Titus Andronicus, Titus XX is a punk rock musical with an all female cast and band!  Book, music, and lyrics by the playwright, Shawn Northrip, who wrote the Varlets' first production, Ramona and Juliet.  This is a no-hold Bard adaptation.  Not to be missed!